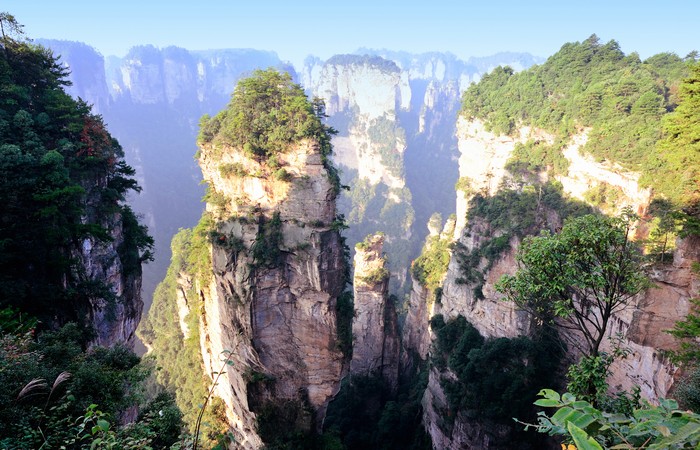 Zhangjiajie is is a rising tourist city famous for its unique natural scenery and abundant tourism resources. Its beautiful water and mountains have attacted tourists from all over the world. Grab this tour and go to the world of Avatar for real on this Avatar Zhangjiajie Tour!

ITINERARY
PRICE
Q & A(1)
From USD  257P/P  > Price list
Free Enquiry
Day 01 Arrive in Zhangjiajie
Detailed Itinerary: Your guide will meet and welcome you at Zhangjiajie Airport, then pick you up and proceed to hotel. You are free for leisure the rest of the day.

Day 02 Zhangjiajie
Detailed Itinerary:
Zhangjiajie National Park is divided into 3 portions: Yuanjiajie, Yangjiajie and Tianzishan.  Till now the cable to Tianzishan is till under construction.  So today we will visit Yuanjiajie Mountain and Yangjiajie Mountain.  Take Bailong lift up to Yuanjiajie.  Walk around the mountain top for 1 hour to see the No. 1 Bridge.  Then take 30 minute coach to Yangjiajie.  Hike another 1 hour to Wulong Village and Tianbofu.   Take cable car down the mountain and finish today's tour.

Zhangjiajie (Bailong Elevator):  A glass elevator built onto the side of a huge cliff.  It is 1,070 feet (330 m) high. It is claimed to carry 3 world records:  the world fastest passenger elevator, the world highest outdoor sightseeing elevator and the world maximum load elevator.

First Bridge: a 5 meter stone slab naturally wedged between two peaks. The back garden here is known as the "Natural Bonsai" and resembles the royal garden with varieties of pinnacles.

Yuanjiajie Scenic Area: Yuanjiajie is famous as the Southern Sky Pillar inspired the floating mountains in the Hollywood blockbuster Avatar.

- IMPORTANT NOTICE-
Due to the renovation of cableway in Tianzi Mountain, the following areas can not be reached till Oct 2015.

Ten-mile Gallery: Located in the Donggou Gorge, Ten-mile Gallery is a 5km scenic road with Wanxing village and Longtan village on each end. With all kinds of sceneries and attractions on it, the road offers an amazing experience of beauty.  We will take mini train ride through this picturesque area.

Day 03 Depart from Zhangjiajie
Detailed Itinerary: Today you will visit Golden Whip Stream, Yellow Dragon Cave and Junsheng paiting Gallery with a visit to the Silk shop. After, you will be transferred to the airport for departure.

Yellow Dragon Cave: Huanglong Cave is a karst cave located near the Wulingyuan district of Zhangjiajie City, Hunan, People's Republic of China and a national 4A rated scenic area.

Junsheng Sandstone Painting Gallery: Reputed to be a form of ”green painting” and ”environmental protection painting” in art circles, Junsheng Sandstone Painting is regarded as ”the special pride of Hunan”. It is highly rated and prized by art collectors. In fact, it is considered the precious gift that the Hunan Provincial Government present to all guests at home and abroad.

Price per person in U.S.dollarChange a currency:
USD
2020